Saltwater (Estuarine) Crocodiles are bred and raised on the property for their skins and meat. Visitors have the opportunity to participate in a guided tour of nearby farm to learn how it works and why the sustainable utilisation of farmed crocodiles contributes to the conservation of wild populations and their habitats. 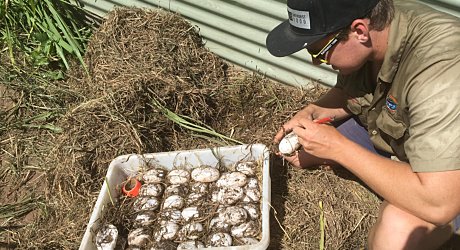 How Does the Farm Work?

The skin from the Estuarine Crocodile is highly sought after within the fashion industry due to its comparatively small scale and lack of osteoderm (small bones within the skin).

Adult crocodiles are kept in pairs or colonies for breeding.  Female estuarine crocodiles reach sexual maturity at lengths of 2.2 to 2.5m. while males mature later at approximately 3.2m.

Approximately six weeks before nesting, the female will signal the male by using body language.  Mating takes place in the water.

Between the months of November and March, the female Estuarine crocodile builds a nest of soil and grass about one-metre-high, using her feet.  Mounding the nest helps to keep the clutch of about 50 eggs safe from flooding during the wet season and assists in maintaining the correct temperature for incubation.

Each morning, during the nesting season, the breeding enclosures are checked for nests.  The eggs are removed from the nest and placed in an incubator.  Removing the eggs from the nest gives the embryos the best chance of survival.  In wild ecosystems, nests are susceptible to flooding, overheating and predation.  The sex of a crocodile is determined by incubation temperature.  Males are produced with an incubation temperature around 32 degrees Celsius, while females are produced above and below that temperature.  For farming purposes, the majority of eggs are incubated to produce the faster growing males. A clutch of crocodile eggs takes around 86 days to hatch. 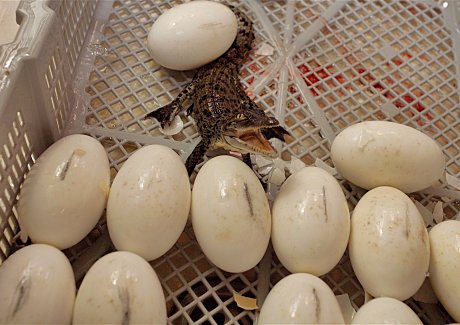 The hatchlings are housed in a specially designed building called a Hatchery where the environment is carefully controlled.  The air and water temperatures are maintained at a constant 32-degree C and the water is regularly changed and reused.  The hatchlings are fed special mince, five times a week made from red meat and chicken with a mineral and vitamin supplement.

The hatchlings are relocated to a Grow Out Building once they reach a length of 70cm at approximately six months of age and remain there until they are ready for market.  Strict hygiene and good quality foods are essential for health, fast growth and superior quality skins.

The crocodiles reach market size of 1.5 to 1.8 metres at approximately 3 years of age.  They are humanely euthanised and transported to a registered processing plant.  The average carcass produces 4kg of saleable meat, which is popular with local restaurants.  The skins used for our Croctique leather goods are cleaned, salted and graded before export to Japan for tanning and production into premium quality leather goods under our own brands.

Why Conserve the Crocodile?

Conserving crocodiles presents special challenges as they are the largest predators in their habitats, with the potential to threaten humans and livestock.  Worldwide, crocodiles were hunted for their valuable skins and meat.  Habitat loss and pollution of aquatic habitats continues to detrimentally affect world crocodilian populations.

During the 1960s, over half the 26 crocodilian species faced extinction.

Along with over 175 other nations, Australia is a signatory to CITES, the Convention of International Trade in Endangered Species of Wild Flora and Fauna. Through CITES, the IUCN regulates the international trade in crocodiles and crocodile products.  Federal and state laws protect both Australia’s crocodilian species.

The IUCN encourages the sustainable use of crocodiles for skin and meat production as a legitimate conservation tool. Crocodiles are a natural renewable resource with considerable potential for sustainable commercial use. 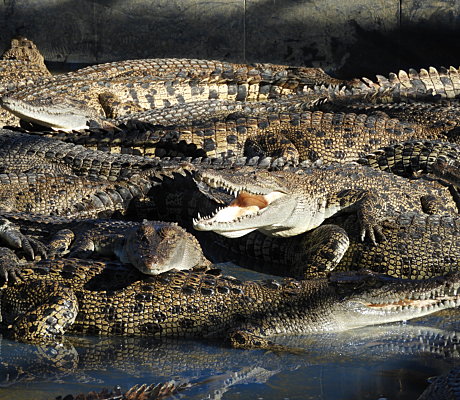 How Does Farming Help Conservation?

In Queensland, as a result of regressive government policy, crocodiles are primarily farmed through captive breeding.  Captive breeding involves the keeping of adult stock on the farm for the production of offspring which are raised for commercial production, the same as with chickens and cattle.

Its success is dependent upon the supply of eggs or juveniles from the wild.  This in turn necessitates maintaining a healthy habitat and breeding population.  Ranching has very little effect on the recruitment to the adult population, because of the high rate of mortality experienced by young wild crocodiles (est. 99%).  It is a safe method of utilising the wild population with little risk of over-harvesting as it provides a strong incentive to conserve animals of breeding age in the wild.

The eggs or hatchlings are sold to crocodile farms giving landholders and traditional owners a financial reward for protecting the crocodiles and wetlands on their property, and compensating them for the occasional loss of livestock to crocodiles.

Government controlled monitoring programs in the Northern Territory and Western Australia ensure the wild populations are not over-harvested.  Despite the removal of thousands of eggs every year, the crocodile population in northern Australia is in excess of 150,000 and increasing.

Public education is an important component of crocodile conservation.  By teaching people how to live safely with crocodiles, in many cases tragedy can be averted.